Brianne Kurdock is a member of the Firm’s Washington, D.C. office and a shareholder in the Energy and Natural Resources, Environmental and Transportation Safety groups and Pipeline and HazMat Safety practice. Ms. Kurdock represents clients in pipeline safety matters at the U.S. Department of Transportation, Pipeline and Hazardous Materials Safety Administration (PHMSA), state commissions, and the federal courts. Her nationwide practice covers compliance and strategic counseling, audit preparation, incident response, enforcement proceedings, regulatory comment preparation, and litigation. Ms. Kurdock has significant experience in these areas as a former PHMSA attorney and as regulatory counsel to the Interstate Natural Gas Association of America, an industry trade association. She has experience in all sectors of the pipeline industry, including gas transmission, gathering, distribution, oil, natural gas liquid, and product pipelines, liquefied natural gas facilities, and products and chemicals terminals. Ms. Kurdock also has experience in handling environmental regulatory issues affecting pipeline construction and operational activities.

Prior to joining Babst Calland, Ms. Kurdock served as the primary pipeline safety and environmental regulatory attorney for the Interstate Natural Gas Association of America, a trade association that represents the interstate natural gas pipeline industry in North America. As a former PHMSA attorney, she represented the agency in regulatory, enforcement, and litigation matters including serving as regional counsel in administrative enforcement cases and the lead attorney for special permit applications and rulemaking initiatives.

Previously, Ms. Kurdock practiced land use and environmental law as an associate in a private law firm.

Ms. Kurdock earned her B.A. from the University of Virginia in 2000. She received her J.D. from Seton Hall University School of Law in 2005. After law school, Ms. Kurdock clerked for the Honorable William J. McGovern, Superior Court of New Jersey.

Ms. Kurdock is admitted to practice in the District of Columbia, New York and New Jersey and before the U.S. District Court for the District of New Jersey. She received the U.S. Department of Transportation’s General Counsel’s Superior Achievement Award, the PHMSA Administrator’s Team Eagle Award, the PHMSA Administrator’s Superior Achievement Award, and the New Jersey Superior Court’s Certificate of Commendation. 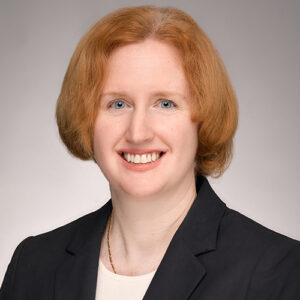