Mark Shepard is a shareholder in the Litigation Group of Babst Calland and currently serves on the firm’s Board of Directors. Prior to joining the firm, he served as chair of the litigation group for one of Pittsburgh’s largest law firms.

Mr. Shepard has maintained an active practice in toxic tort litigation involving alleged exposure to toxic substances in the air, water and/or soil. During his career, he also has frequently been retained to handle communications, insurance coverage and mining litigation. He also has substantial experience in products liability defense, particularly in the mining equipment industry. As a result of the nature of his litigation practice, Mr. Shepard has participated in numerous forms of alternative dispute resolution (ADR) proceedings including commercial arbitration, mediation, mini-trials and early neutral evaluation. He has been retained regularly as a mediator for complex commercial, products liability, insurance coverage, securities and natural resources cases. Mr. Shepard currently serves as a mediator, arbitrator and early neutral evaluator in the United States District Court for the Western District of Pennsylvania.

Mr. Shepard is an active member of the Allegheny County, Pennsylvania and American Bar Associations. He also was appointed to the Pennsylvania Bar Association’s Judicial Evaluation Commission in 2007 for a three-year term. Mr. Shepard served as chair of the Allegheny County Bar Association’s Civil Litigation Section in 2000-2001 and as a member of the Bar Association’s Board of Governors from 2005-2011. In 2001, he was elected to membership in the Allegheny County Academy of Trial Lawyers. Mr. Shepard has served as chairman of the Academy’s Program Committee. For a number of years he coordinated the county-wide High School Mock Trial competition. Since 2020, Mr. Shepard has been ranked among Pennsylvania:  Pittsburgh & Surround’s top general commercial litigation lawyers in Chambers USA’s America’s Leading Business Lawyers. He has been listed in The Best Lawyers in America© in the Commercial Litigation Section since 2006, Litigation – Environmental Section since 2011 and Bet-the-Company Litigation Section since 2015. He was named the Best Lawyers® 2019 Litigation – Environmental “Lawyer of the Year” and 2022 Bet-the-Company Litigation “Lawyer of the Year” in Pittsburgh, Pa. He was also selected to the 2005-2022 Pennsylvania Super Lawyers and 2011-2014 Top 50: Pittsburgh Super Lawyers lists (Thomson Reuters). 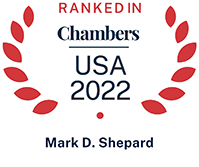 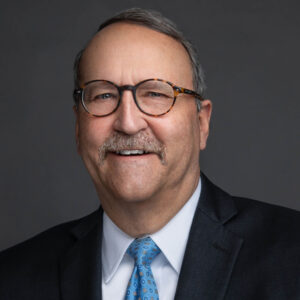