Sean McGovern is a shareholder in the Environmental Services and the Energy & Natural Resources groups of Babst Calland. Mr. McGovern’s practice involves counseling clients on a variety of federal and state regulatory issues related to coal mining, as well as conventional, coal bed methane, Marcellus, Utica and other unconventional shale gas well development, production, midstream activities, storage and transportation in the Appalachian Basin. He counsels these clients on a wide range of environmental matters, including water withdrawal, erosion and sediment controls, various permitting requirements, the disposal of produced fluids and other wastes generated by these industries, in addition to other issues related to pooling, unitization, and royalties. He regularly handles industrial wastewater, waste management, and storage tank issues, as well as site reclamation and remediation. Mr. McGovern also has experience with environmental transactions, including due diligence activities, and the river basin commissions located in Pennsylvania.

In 2006, Mr. McGovern graduated from the University of North Carolina School of Law at Chapel Hill, earning his J.D. While in law school, Mr. McGovern was a member of the Holderness Moot Court’s Environmental Negotiation Team that won the Robert R. Merhige, Jr. National Environmental Negotiation Competition in 2006. In addition, he was an Articles Editor for the law school’s Journal of International Law and Commercial Regulation, as well as a Dean’s Fellow Counselor and the Chair of the Student Body Association Leadership Speaker Series.

Prior to joining Babst Calland, Mr. McGovern worked as an associate for a Harrisburg law firm where his practice included food industry, trademark, international and Internet law.

In 2012, Mr. McGovern was selected by The Legal Intelligencer as one of only 35 “Lawyers on the Fast Track” in Pennsylvania. This recognition is given to attorneys under the age of 40 who have demonstrated excellence in four categories:  development of the law, advocacy and community contributions, service to the bar and peer/public recognition. Mr. McGovern was also selected to the 2012-2013 and 2015-2016 Pennsylvania Rising Stars lists (Thomson Reuters). 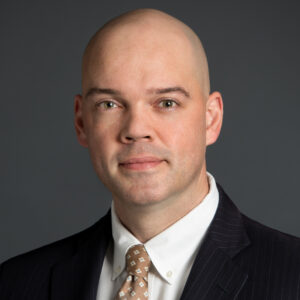