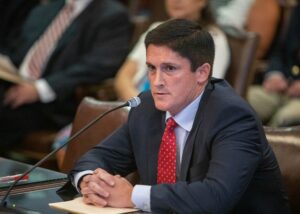 In his testimony on August 17, 2021 at the Pennsylvania House Environmental Resources and Energy Committee public hearing on the Environmental and Economic Benefit of Pipelines, Babst Calland Attorney Keith Coyle, chairman of the Marcellus Shale Coalition’s Pipeline Safety Workgroup, explains, “As long as we are relying on fossil fuels to produce power, we need pipelines to deliver them safely. …It’s pretty clear we are going to be relying on natural gas and petroleum for some time. There is no other way to do this safely and to move product in bulk besides these pipelines.”

To view the video of the full public hearing of the House Environmental Resources & Energy Committee on the Environmental and Economic Benefits of Pipelines, click here.

What’s Next For PHMSA Gas Gathering Rule with Keith Coyle

Attorney Keith Coyle provides an update on the latest progress in the PHMSA rulemaking process for the Gas Gathering Rule.

In this episode, you will learn about the importance of how gathering lines are defined, the impact of the recently-updated API RP 80 that provides additional guidance on how to define gathering lines, what type of gathering lines need to comply with the PHMSA safety requirements in 49 CFR 192, how the transition to a new administration will impact the timing of the rulemaking being finalized, and more topics. To listen to this podcast, click here.

On a recent episode of Pipeliners Podcast, attorney Keith Coyle discusses insights on PHMSA rulemaking and how pipeline policy was affected by the previous four years, and how it might be affected in the next four years. To listen to this podcast, click here.

The legislation addresses other areas of concern to the pipeline industry, such as requiring more timely review of technical standards and imposing additional criminal sanctions for pipeline vandalism.  Finally, the bill includes rulemaking mandates that focus on items of importance to PHMSA—namely, expanding the operator qualification (OQ) program to pipeline construction and establishing regulations for inactive pipelines.

Please read more about this decision in this Alert.

Pipelines are safe. They already are the safest way to transport energy – and getting safer.

In a recent op-ed published in the Post-Gazette, “Gas Pipelines Represent Prosperity” (Sept. 5 Perspectives), David Spigelmyer and James Kunz of the Marcellus Shale Coalition described the many benefits END_OF_DOCUMENT_TOKEN_TO_BE_REPLACED

Many Drone Operators Seeking a Waiver are Missing Required Information

On October 25, the FAA released a statement notifying potential applicants seeking a waiver from the small unmanned aircraft systems (UAS) rules of common errors in the application process.  In the two months since FAA started issuing waivers from the Part 107 rules, the agency has issued over 81 authorizations for flights in Class D and E airspace and 36 waivers of Part 107 requirements.  However, the agency has also denied many waiver applications on account of incorrect or incomplete information. The agency has denied 71 waiver requests and 854 airspace applications.  UAS operators that are seeking a waiver should ensure that they include a detailed description of how they intend to meet the performance based standards issued by FAA.  See previous Babst Calland Pipeline Safety Alert. For example, applicants seeking a waiver of the nighttime operation restriction must provide the methods for which the remote pilot will maintain visual line of sight during darkness; see and avoid other aircraft, people, and ground-based structures during nighttime operations; continuously determine the position of the UAS, and increase the visibility of the UAS at a distance of 3 statute miles unless a system is in place to avoid all non-participating aircraft.  Applicants must also respond promptly to any requests from the FAA for additional information.  If the FAA does not receive a response after 30 days, the agency will deny the waiver request.

The FAA also created the Unmanned Aircraft Safety Team (UAST), a group of industry and government stakeholders.  The UAST team is charged with analyzing data to enhance safety with drone operations.  The UAST held its first meeting in mid-October.

On October 14, the Pipeline & Hazardous Materials Safety Administration (PHMSA) published its Interim Final Rule (IFR) entitled “Pipeline Safety: Enhanced Emergency Order Procedures” in the Federal Register.  The agency had previously issued a pre-publication version of this rule on October 4.  See Babst Calland’s Pipeline Safety Alert.  PHMSA will use these new regulations to implement its emergency order authority conferred by Congress in the “Protecting our Infrastructure of Pipelines and Enhancing Safety Act of 2016” (PIPES Act).  PHMSA may issue an emergency order to address an unsafe condition or practice, or a combination of unsafe conditions or practices that pose an imminent hazard to public health and safety or the environment.   The IFR contains administrative procedures that PHMSA must follow in determining if an imminent hazard exists, the factors that must be considered before PHMSA issues an emergency order, and the content of those orders, including a description of the persons subject to the restrictions, prohibitions, or safety measures and the standards and procedures for obtaining relief. The IFR also creates a process for administrative review of an emergency order that is largely patterned on the statutory text in 49 U.S.C. § 60117(o), including the referenced procedural rules for HazMat emergency orders in 49 C.F.R. § 109.19.

PHMSA may use this authority starting today, October 14.  Interested parties may file comments on this final rule until December 13, 2016.

On October 14, the Pipeline and Hazardous Materials Safety Administration (PHMSA) published its Final Rule entitled “Expanding the Use of Excess Flow Valves in Gas Distribution Systems to Applications Other Than Single-Family Residences” (EFV Final Rule) in the Federal Register. The agency had previously issued a pre-publication version of this rule on October 7. See Babst Calland’s Pipeline Safety Alert.  In response to statutory changes and a National Transportation Safety Board recommendation, PHMSA is expanding the existing requirement that operators install an excess flow valve (EFV) on certain natural gas distribution pipelines to include additional types of new or replaced service lines. The agency is also requiring curb valves or other manual shut-off valves on new or replaced service lines with meter capacities above 1,000 standard cubic feet per hour and requiring operators to notify customers of their right to request the installation of an EFV on certain types of service lines. The EFV Final Rule will become effective on April 14, 2017.

The Federal Aviation Administration (FAA) recently issued Performance-Based Standards highlighting information that an applicant must include in order to seek a waiver of Part 107, the rules that apply to the operation of a small unmanned aircraft system.  The FAA previously released the form and instructions on how to apply for a waiver from certain requirements (See previous Babst Calland pipeline safety alerts for more information on the Small UAS Final Rule and the waiver process.).  Babst Calland’s Pipeline and HazMat Safety team has prepared a Pipeline Safety Alert noting observations on the Performance-Based Standards as they pertain to the line-of-sight requirement (14 C.F.R. § 107.31).

On August 29, 2016, the Federal Aviation Administration (FAA) released the form and instructions on how to apply for a waiver from certain requirements included in the “Operation and Certification of Small Unmanned Aircraft Systems” Final Rule. This final rule went into effect on August 29, 2016, and permits the use, with certain limitations, of small unmanned aircraft systems (small drones) for non-hobby and non-recreational purposes. Babst Calland’s Pipeline and HazMat Safety team has prepared a Pipeline Safety Alert providing additional details on the application process.